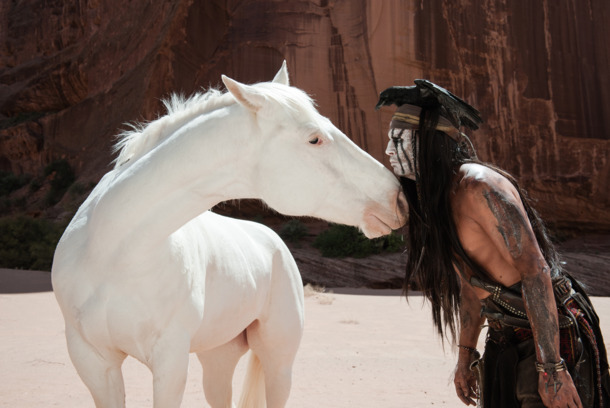 George Lucas and Steven Spielberg recently took part in a symposium in which they predicted an imminent “implosion” in the system as a result of the industry’s current obsession with blockbuster movies. Curious about whether or not this was simply exaggeration, Vulture’s David Edelstein got in contact with producer Lynda Obst, author of a new book titled Sleepless in Hollywood: Tales From the New Abnormal in the Movie Business. During their conversation, she grimly agreed with the two moguls, predicting, “If, say, four huge tentpole [movies] were to go down at the same time in the same season, it would be catastrophic.”

The Lone Ranger — a.k.a. Pirates of the Caribbean 4.5: Sparrow Goes West — is looking like it might be a huge tentpole movie (it reportedly cost $215-250 million) that goes down this weekend. It also happens to be a perfect example of almost everything that’s wrong with the current Hollywood blockbuster system. In addition to being massively expensive, The Lone Ranger demonstrates the industry’s franchise obsession, origin-story laziness, over-reliance on bloodless violence, and inability to prevent running-time bloat. These are not small problems, and there is no sign that they will be riding off into the sunset anytime soon.