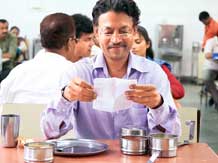 Ritesh Batra’s The Lunchbox, which releases this week, is a significant film. Not because it got rave reviews at every major festival from Cannes to Toronto or because it could end up being India’s entry to the Oscars-it is a critical film because it tests how hard Indian studios can push in their bid to revive the sagging overseas market for Indian films.

The Lunchbox is a gentle, realistically-told love story of a widower and a neglected housewife. The overseas market, however, is “very star-driven, extravaganza-driven,” says Avtar Panesar, vice- president (international operations), Yashraj Films, one of the oldest players in the NRI markets. “They (the NRI audience) don’t want to see Life in a Metro (2007) because that is too Western. They want to see the glamourous side of India. There was some traction with Vicky Donor (2012) etc, but it is slow,” thinks Pranab Kapadia, president (distribution), Eros International.

As the Indian market matures, this creative disconnect has meant that growth in the overseas market has, “slowed down,” says Gautam Jain, head of research, Ormax Media, a TV and film research outfit. From 30-40 per cent for large films, the proportion of box-office revenue coming from overseas has gone down to 20-25 per cent over the last decade. For smaller or medium-budget films, it is down to 10-15 per cent. At an overall level, the global market now brings in only 6.7 per cent of the total revenues for Indian films, down from 20 per cent or so in 2000. (See table)

Some of the biggest overseas markets have stopped growing, while others are hiccuping. The US, UK and West Asia bring in 75 per cent or more of all overseas revenues for an Indian film. “The UK market has been flat over the last two years,” says Rohit Sharma, head of international sales and distribution, Fox Star Studios. “Business plans are not drawn on the basis of the overseas market,” adds Smita Jha, leader (entertainment and media practice), PricewaterhouseCoopers. At over Rs 10,400 crore, the domestic market is much larger and faster-growing compared to the Rs 760 crore overseas one

Jordan is unique in that he has been able to maintain that emotional connection with his consumer base for more than 25 years,” says Henry Schafer, Executive Vice-President at the Q Score Company.

Nearly 30 years later, the brand is still a marketing juggernaut. It controlled 58% of the U.S. basketball shoe market in 2012, according to research firm SportsOneSource. The Jordan Brand’s parent, Nike, was second with a 34% share, while Adidas (5.5%), Reebok (1.6%) and Under Armour (0.6%) divvied up the leftover

The demo was not going well.

It was a late morning in the fall of 2006. Almost a year earlier, Steve Jobs had tasked about 200 of Apple’s top engineers with creating the iPhone. Yet here, in Apple’s boardroom, it was clear that the prototype was still a disaster. It wasn’t just buggy, it flat-out didn’t work. The phone dropped calls constantly, the battery stopped charging before it was full, data and applications routinely became corrupted and unusable. The list of problems seemed endless. At the end of the demo, Jobs fixed the dozen or so people in the room with a level stare and said, “We don’t have a product yet.”

The effect was even more terrifying than one of Jobs’ trademark tantrums. When the Apple chief screamed at his staff, it was scary but familiar. This time, his relative calm was unnerving. “It was one of the few times at Apple when I got a chill,” says someone who was in the meeting.

More at Wired.com: The Untold Story: How the iPhone Blew Up the Wireless Industry