Telugu cinema is going through a revolution of sorts : creatively and commercially. Digital cinema has enabled new, budding filmmakers with no studio backing not only to make a film with their own resources, but also release it successfully and profit it from it. Ee Rozullo, the smash hit that was made on a budget of Rs 60 lakhs and grossed Rs 800 lakhs at boxoffice is the talk of the industry. This has inspired an army of young filmmakers who out on the streets with digital camera, amateur actors – making their own dream : an independent feature film.

The film was produced on a meager budget, through efficient planning, eliminating all the excesses of big-budget filmmaking. It deserves to have a case study on its own.

In this two-part blog post, we will open the doors of one of the most valued Netflix assets: our recommendation system. In Part 1, we will relate the Netflix Prize to the broader recommendation challenge, outline the external components of our personalized service, and highlight how our task has evolved with the business. In Part 2, we will describe some of the data and models that we use and discuss our approach to algorithmic innovation that combines offline machine learning experimentation with online AB testing. Enjoy… and remember that we are always looking for more star talent to add to our great team, so please take a look at our jobs page 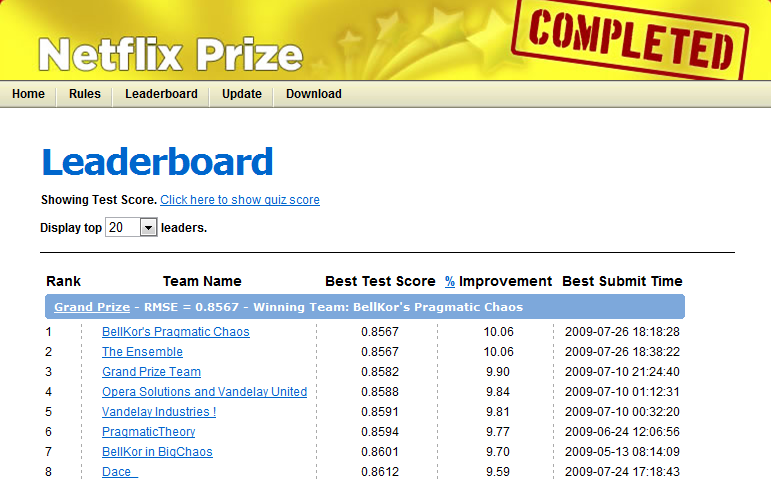 Gone are the days when the film reels were processed in the lab and physically distributed to the theatres in different parts of the country. The digital distribution is helping the digital print to be uploaded from a central server which can be played at different theatres.

The maximum returns of the investment of any film are collected in the first few weeks of the film release. Digital distribution is enabling the distributors to make as many copies as possible with negligible costs; get a wider, timely release and maximise collections. Big budget films are releasing with a record number of prints without incurring heavy initial costs that used to be the case earlier, said U Lakshm­ina­rayana, CEO, Cinematica Digitals.

There is a misconception that digital technology is killing small films. Small producers can choose few digital theatres and get the film released. They can increase the number of exhibition centres once the film gains popularity. It is not pain for any distributor to pay the subscription to digital exhi­bitor as long as the movie makes revenues. The digital distribution is helping them to pay monthly subscription rather than a lump sum initial investment, he said.

The growth story of digital exhibition has taken off with the release of Maghadheera. Almost 70 theatres in the State converted to digital format just few weeks be­fore the film release. This enabled the film to hit 1,000 screens. The producer of the film, Allu Arvind, further went ahead and started Cinematica to focus on digital exhibition across An­dhra Pradesh, he buttresses his point.

The trend has picked up, and the growth is immense in conversion of normal theatres in to digital ones in last two years. The few theatres that are left out may get converted in to digital very soon, making the whole distribution switch to digital, he added.

On piracy, Lakshminarayana said the movie is also better protected with digital technologies. Even if some theatre owner tries to make a pirated copy of the film, he can easily get caught. Forensic water marking, which is not visible to the naked eye can be easily read and identified from which theatre (print) the film is pirated.

Digital cinematography helping the industry to save 30-40 per cent costs. However, if the technicians are not skillful enough, the costs end up same as film camera. Only 10 per cent of the films in the State are produced through digital technologies. The industry has not seen a major success with digital technologies, said Srinivas (SKS), executive producer, Ee Rojullo.

All the major stars films are cinematographed with a film camera, due to various reasons like long running shots and chasing shots. The trend will pick up in the industry once they see a star film produced with the digital camera. The quality of the movie produced will not be inferior to any of the film camera, he said.

(As published in PostNoon )