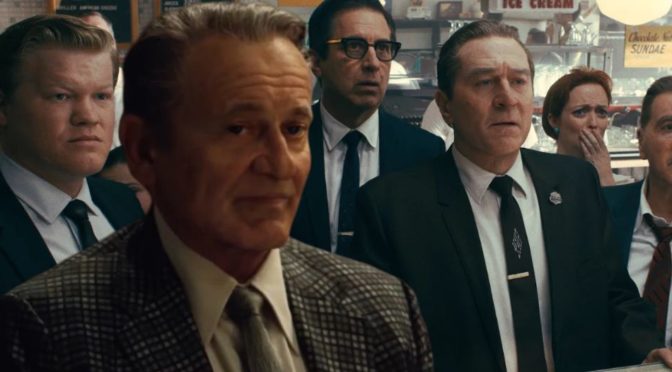 In the end credits of ‘The Irishman’, Robert De Niro shares the ‘Produced By’ credit with Martin Scorsese. A good producer typically relegates himself to the background once his duties are finished or when the spotlights are on, and resurfaces whenever required, in whichever role that is required. (Great producers don’t even mind to fill in for a light boy if need be, to avoid the meter ticking in idly.) Robert De Niro does the same to the proceedings on the screen. As Frank Sheeran aka The Irishman, he holds the story together, does his bit in every scene he is put in and plays his part to perfection. Let it be the hitman and his gusto, or the father painfully aware of his growing estrangement with his daughter Peggy (Anna Paquin) or as the loyal follower to his mentor Russell Bufalino (Joe Pesci) who takes care of him like a kid or as the frustrated henchman who tries and fails to convince his union boss Jimmy Hoffa (Al Pacino) to mend his ways or that older self with simple (yet so near impossible for any other actor) forlorn look in the car wash, hoping to find something similar to cleanse his sins…it is vintage Robert De Niro all the way. And he shows one can still be a boss, even while staying quietly in the background, even when playing a side kick the other two great actors- Pesci and Pacino.

Martin Scorsese brings these three great actors together and yet makes sure that each one of them gets their due. Not just them, but many others like the veteran Harvey Kietel (who chides Frank about his first side job that involves ‘his’ laundry store), Ray Romano (as attorney Bil Bufalino who helps Frank understand what legal offence is all about), Jesse Plemons (as Chuckie O’Brien and his car seat-fish episode) and several others like the friendly associate of Jimmy who asks what candy is just before Frank blew away a few taxis. Like a true stalwart, director Martin Scorsese puts the film above everyone else, allows everyone to shoulder the weight, and shine in every scene they are in.

Great actors rule with or without dialogues. Sometimes, just their presence is enough. Joe Pesci doesn’t have a ‘funny guy’ routine from ‘The Goodfellas’ or ‘the tough guy’ bashing from ‘The Casino’. But he does enough in the two scenes just before Frank leaves for his final meeting with Jimmy. He exudes affection and power at the same time, and Frank has to no choice but to comply.

Same with Al Pacino, who plays the boisterous and very warm Jimmy Hoffa. His contrasting scenes with Robert De Niro and the others, where his ego comes into full play, are a treat to watch. And the final scene before the fateful meeting as he looks on at his foster son and then at Frank (Robert De Niro is terrific here) for assurance, Al Pacino is at his understated best.

Performances wise, nothing a movie buff can ask for more…that too from the best in the business. For this reason, Martin Scorsese deserves singular credit and makes ‘The Irishman’ a must watch.

Your smartphone is the gateway for platform businesses to drive their hooks deep into your psyche and pockets, edge out traditional businesses, and reset markets. In doing so, they are becoming monopolies, the likes of which we’ve never seen before. What is fair play in this new world? 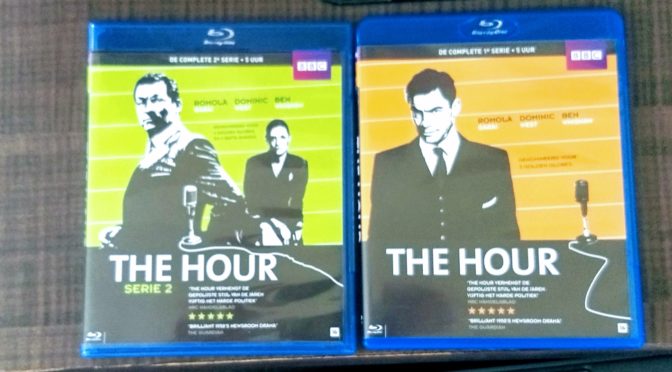 ‘The Hour’ is about a new current-affairs show on BBC in 1956, and what happens in the lives of the team members involved in the making of the show. The series takes us through the journey of the show from a staid newspaper presentation to the visual and ‘breaking’ news reportage. With spies, honey traps and corruption thrown into the mix, danger is just around the corner for the intrepid Producer Isabel (Bel) Rowley ( Romola Garai) , and the journalist Frederick (Freddie) Lyon ( Ben Whishaw).

Well written and acted, this series is a good watch. The only crib being at times, the writers try too hard to fit it into the thriller genre, and dumb down the proceedings a bit (like the last episode of season 2). But in the end, it is still engaging enough and keeps you hooked throughout.