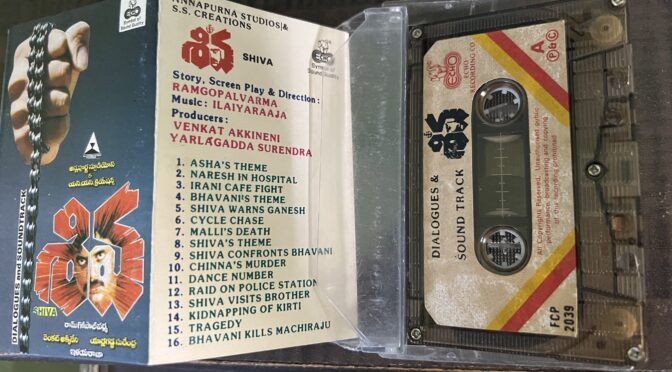 Siva/Shiva (1989), is a special movie for our generation i.e. for someone who was a college student in the late 80s. Cycle chain scene captured the imagination to such an extent that, people tried to emulate it in real life to disastrous results. Moreover, the brand Siva was so intense, that there were scuffles and fights in college amongst students, to earn the reputation of ‘I am the Siva of this college’.

I watched it for the first time; in Meera Theatre (Khairtabad), after a day or two, the film released. I particularly remember the serpentine queue for a second show, and my cousin fervently praying to the nearby Lord Ganesha’s idol for tickets. (I for one, always value other’s time and mine too, and thought it was not so important to poach into Lord Ganesha’s busy schedule.) Chance or God favoured us, and we got the tickets. In that viewing, I did not quite get the movie. However, I overheard lot of praise and even some concerns from fans of other stars who said something to the effect of ‘if Nagarjuna gets a couple films like this, their favourite stars’ days were numbered’.

Later, when I saw the film in Devi 70mm for the second time, I was able to appreciate the uniqueness of the movie. For me it was the sound effects, music and re-recording, and Devi theatre was one of the best at that time. I was hooked on to the film from the first scene itself; where the crane comes down to reveal the college name board and the waiting goons. (In the interview, RGV mentions practical difficulty pointed out by his associate, (Siva) Nageshwara Rao and how RGV instructed the art director to match the height of the name board with the height of the available crane.) And, when the titles start with the smoke from the car as a wipe to introduce the title of the film against the master Ilayaraja’s score, your experience just got to the next level. (A friend of mine commented that it was an excellent observation of the director of a diesel car that spews such kind of smoke and use it cinematically)

Here is some interesting stuff that one can learn from this interview.

Tailpiece 1: Shiva was a trendsetter in many ways. People started looking at things like sound design/mixing, taking and others, very differently. It was one of the very few films (Sholay, Muthyalamuggu etc) that had the Dialogues and Soundtrack released in the market

Tailpiece 2: My father’s friend would talk about the film a few months prior to its release (when the film name was on the walls of Jubilee Hills, as was the norm in those days) and its English piccher taking. My father himself, would tell me a few more titbits related to the making and RGV, which cannot be made official:-) Incidentally,he even interviewed him for Zee Telugu when his Govinda Govinda ran into censor troubles and father actually telecasted the uncensored scenes on Zee. Wish I had that episode:-)