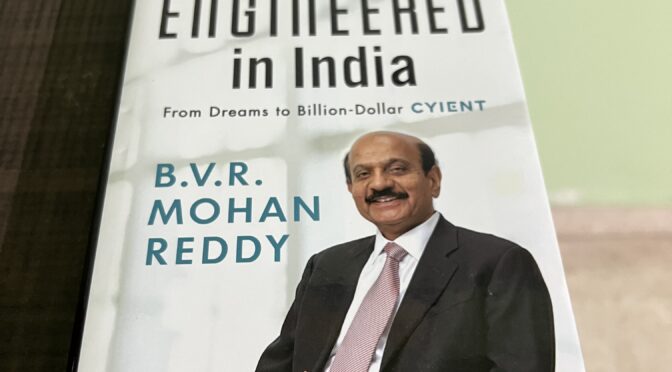 On Page 201, the author quotes an incident from the company’s early days in HUDA Maitrivanam building in Hyderabad, and his shock when he sees a woman employee walking up the stairs to their 6th floor office. (Having worked in the same building in 1995-96, in another software company I had firsthand experience of this issue, where the elevator would go out of service at the drop of a hat.)

The following paragraph sums up the attitude of a Founder-CEO who takes every problem head on and in the process keeps building the character of his company.

“There was no way I would allow an expectant mother in my employ to endanger herself and her future child walking up and down six floors! I took the matter to the Director, STP (Software Technology Park) Hyderabad, J.A Chowdary. Apparently, he was not equipped to deal with it at his level either, but he raised it with the Secretary, Department of Electronics (now Ministry of Electronics and Information Technology), Government of India, who helped us resolve the issue. It took weeks of chasing, but the building finally had a functional elevator!”

The success story of Cyient (erstwhile Infotech) had to be told, as many companies that started digitization services in the 90s folded in due course or failed to scale or pivot. And, who better to tell it all, than the Founder of Cyient himself—Sri.B.V.R.Mohan Reddy.

‘Engineered in India’ is part memoir and part business and management book, as the author himself mentions in the introduction.

In a way the first part of the book is like an epic movie and the second, the making of the movie featurette, spanning across the crafts, which in this case, the important aspects of a business. The second part covers significant attributes of a successful and sustainable company:  pursuit of excellence, customer centricity, quality and process orientation, people development, strategy and business transformation, money management, crisis management and institution building. (A timeline of events/milestones mapped to these attributes, as an appendix would have been nice as a cross-reference, while reading Part 2)

In the last chapter on institution building, he highlights his belief in ‘Clock building and not time telling’ (From Jim Collins ‘Built to Last’) and his methodical succession planning exercise.

Any first generation entrepreneur’s book is a necessary read as one gets to pick up learning across the functions of a business, as he/she is so involved in every aspect. (This book calls for taking extensive notes, mine exceeded 10 pages).  What makes ‘Engineered in India’, even better is the fact that Sri.B.V.R. Mohan Reddy, though being a very successful person was satisfied to remain in the shade rather than bask in its glory, stuck to his engineering ethos and when the time came, he did not hesitate to hang in his shoes for the new generation to take over. While his individual story takes a new turn, the story of the company he founded continues.

Lakshonline on So Good, they can’t ignore you