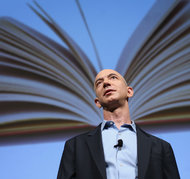 Well, Bezos is the god in Stone’s story, and definitely one of the vengeful and punishing sort, at least when it comes to those who have worked for him, those he has competed against and those who thought, mistakenly, they were in some sort of partnership with him. (That leaves his family, whom we’re told he loves dearly.)

About a quarter of the way into “The Everything Store,” Brad Stone’s engrossing chronicle of the rise of Jeff Bezos and Amazon, he reveals that in the late 1990s, Bezos seriously contemplated trying to collect two copies of every book ever printed and store them in a warehouse in Lexington, Ky. Called the Alexandria Project, a k a Noah’s Ark, the initiative never got out of dry dock. And Lexington had no idea about its near miss with biblical importance.

Project Fargo was even more ambitious: a proposal to fill a warehouse with one of every productever manufactured. “This is the most critical project in Amazon’s history,” Bezos is said to have declared. It wasn’t, but it gives you a sense of the man’s penchant for grandiose ideas.