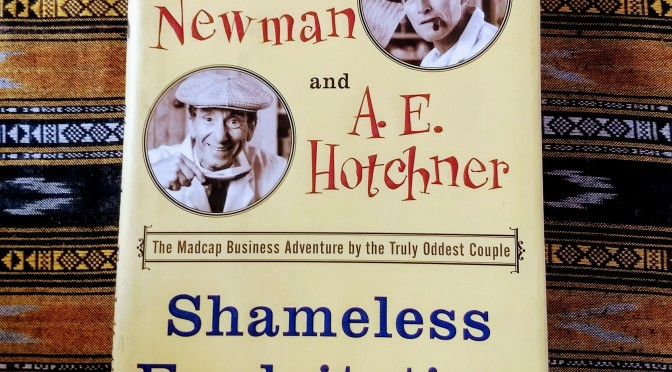 ‘Shameless Exploitation…’ is an interesting book about the madcap business adventures of two friends who incidentally happen to be a famous movie star and an accomplished writer.  Just like their business journey the book follows  an unconventional style with the narration shifting from the points of view of the authors–Paul Newman and A.E.Hotchner– to third person.

From a published letter in the book. “During dinner,  my girlfriend mentioned you were a movie star. I would be interested to know what you’ve made. If you act as well as you cook, your movies would be worth watching.”

“I wish I could recall with clarity the impulse that compelled me to help bring this camp into being. I’d be pleased if I could announce a motive of lofty purpose. I’ve been accused of compassion, of altruism, of devotion to Christian, Hebrew, and Moslem ethic, but however desperate I am to claim ownership of a high ideal, I cannot.”

“I wanted, I think, to acknowledge Luck: the chance of it, the benevolence of it in my life, and the brutality of it in the lives of others: made especially savage for children because they may not be allowed the good fortune of a lifetime to correct it.”

“I really cannot lay claim to some terribly philanthropic instinct in my base nature,” PL says. “It was just a combination of circumstances. If the business had stayed small and had just been in three local stores, it would never have gone charitable. It was just an abhorrence of of combining tackiness, exploitation, and putting money in my pocket, which was excessive in every direction.”

“Now that I’m heavily into peddling food, I begin to understand the romance of the business–the allure of being the biggest fish in the pond and the juice you get from beating out your competitors.”

“And the best part: we always thought the people on the other end of the checks would be the beneficiaries. But as with the exploitation–there’s a kind of circularity here as well. A reciprocal trade agreement, so to speak.”

“Publicize the generosity in order to become more generous. That’s been the most difficult part of it. But overcoming the dichotomy has provided with the means of bringing thousands of unlucky children to the Hole in the Wall Gang Camps.”

“Without realizing it, by being both stupid and stubborn we stuck to our guns, insisted on all-natural, no preservatives products, and in some small way caused an industry to change its ways. A business we ran by the seat of our pants, without plans or budgets, is now a significant player in the world’s markets. A camp be built in Connecticut for sick children has not been duplicate for afflicted kids all over the world. A vision realized. Like the grain of sand in the oyster, it just grew, and for us, these camps are indeed the pearls. So, whatever it is, whatever it amounts to, whatever it does or doesn’t do, we grabbed it by the shirttail and hung on. Sure makes a believer out of you.”