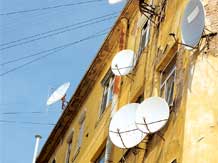 Ten years after Dish TV’s entry, DTH has become a force to reckon with. With over 40 million active subscribers (as of March 2013), it has grown tenfold from just 4 million customers six years ago. And it is no longer a rural phenomenon: 60 per cent of its subscribers are in the country’s top 20 cities. Its share of the total satellite (cable and DTH) homes has gone up from 23 per cent in 2009-10 to 30 per cent now. Industry analysts say that by 2017-18, it will control over 36 per cent of the total subscriber base. That is why private equity funds like India Opportunities Fund (which has invested in Tata Sky) and a whole host of others like KKR and Bain Capital (it is in talks with Airtel DTH) are keen to invest in the sector.

The reasonwhy they are bullish is that DTH is adding over 8.5 million subscribers a year, while cable is growing at a fourth of that number. The phenomenal growth is backed by huge investments: the seven DTH operators have together put in over $4 billion to make it happen. So, what explains the magic of DTH? Obviously, the key is its high-quality signal, especially for those consumers who were used to analog TV. Also, it has provided customers the choice to see what they want rather than being at the mercy of the cable operator.